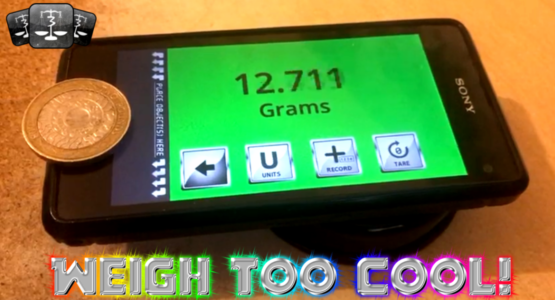 3 Grams is a 3 in 1 FREE Android Digital Scale Simulator App.  There are several similar apps available on the store but be careful as some are fake and will not work, others have different method of weighing which may not work.  It has been improved over the last 5 years+ and works with all major smartphones. In some countries it goes by different names such as timbangan, escamas, balanzas digitales, digitale Waage…

3 Grams is also one the very few (if not the only) app available on iOS / iPhone that allows you estimate weight see the app here.

Please note the original free 3 Grams Digital Scales app was suspended by Google Play for ‘unclear reasons’, based on the fact that they said the app doesnt work when it clearly does! See more info on this video.

Dont worry you can still download the free version(s) using the options linked to below!

Available on Android and Windows Phones.

1 – Digital Scales Simulator
Uses your phones built in tilt sensors to calculate weight of objects.  If calibrated properly and used correctly the app has been shown to be almost as accurate as a real digital scales.  Balance your phone on something curved or soft and then place objects to weigh on bottom of phone. The device must tilt when the object is placed on the device or near it (on the same balanced plane).

3 – Fake / Prank Digital Scales [Windows UWP / Phone]
Fool your friends and family using the fake scales.  Predefine upto 4 fake weight values and you can also use multi tap on the tare button to increase to other values.  Simply place object on the screen and tap once.

We now have improved the weight converter and it can be used offline aswell.  If you want to convert other units, currencies or world times please download our free brand new app 3 Grams Multi Converter !

You can download the free version from Google Play store or Windows App Store using the buttons below, so when you review the app review them on the right store.

The Play Store version is called 3 Grams LiteWeight download it by clicking below:

In cases where you cant access the app stores you can also download the app directly from our website here (if you download from our server you can still buy calibration credits using Paypal by clicking here !)

You can now also weigh objects using your iOS iPhone or iPad using the tilt to weight feature in 3 Grams Tilt Level Meter app on the Apple App Store!

The app converts amount of tilt to an estimate of weight. It works in the same way as the Android 3 Grams Digital Scales app. You just need a known weight similar to the weight of the objects you want to weigh. See the website for more details or click below to download the app now on your iPhone!

There is also a paid Pro Version of 3 Grams which is faster, has no ads and comes preloaded with lot more credits.

Click here to see all three video demonstration of the scales app!

You get upto 4 free credits when you install the app and doing various things like visiting out twitter page etc..  Then you can get free calibration coupons codes we will release every now and again on our social feeds like Facebook page and Twitter.  You simply copy and paste or enter these codes into 3 Gram scale app to increase your credits.  You can also win random free credits when you start the app (1 in 33 chance) and also by watching video ads in the app (when the option is shown at random).

New – In the LiteWeight version you can also watch video ads to get free rewarded credits!

3 Grams app users have left over 45 positive reviews for the scales app to show it does work on Facebook, see here….