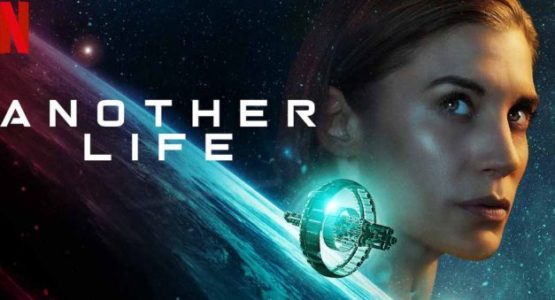 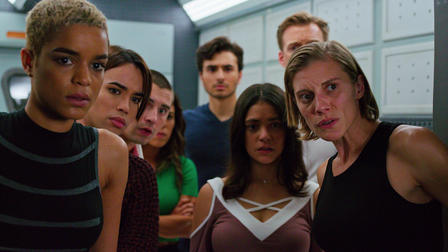 Always interested in viewing scifi tv shows and movies on Netflix I watched this show looking at the trailer.  When you watch scifi shows youre hoping to see something different, new ideas, concepts as there have been LOADS of shows based on space, travel aliens etc…. Also to be any good it needs good cgi, cast, and be comparable to the popular shows and movies.  For example when you watch this you would think of other stuff like Prometheus and Star Trek…

Now of course i doubt a new series will be able to compete with the likes of Star Trek or Prometheus but lets give it a chance.

Another Life on Netflix doesnt hang about, it fast forwards the boring bits for you.  It dives straight in with a huge alien ufo (or as they call it an artifact) planting itself onto planet Earth.  The rest of the show scientists, astronauts and the like are trying to find out what this thing is, where its from and what the Aliens who have sent it want.  Its portrayed kinda like a rubic cube with a team trying to find out how to enter the artifact.  Eventually quite funnily cracked by a random kid.

The main focus however is on a crew that has sent out into space to find the origin of the artifact, they have an idea of where they are going but thats about it.  But the journey will not be a safe or straight forward one, nor as planned.  It seems they will have to deal with horrors and hazards if they are to even reach their destination.

We have an decent array of cast.  We even have the guy who plays Superman in Supergirl, who i recognised.  He didnt seem to fit in tbh i think he still thought he was filming Supergirl.  He doesnt last long and is killed off after a few episodes.  Another actor i recognised was Jessica Camacho who plays the ships rebellious communication expert.

The show touches numerous different stories and topics like AI, alien viruses, social interactions of a ship crew, loyalties, sacrifice and of course aliens.  However there isnt anything that is really new or done really well, its just stuff thats been done before done in another way with different actors.  The AI can be likened to Data from star trek or the Hologram in Red Dwarf.  And this AI William has issues with love and feelings, but at end of day it is still just AI so everything, even percieved feelings have just been programmed but the dilemma in the show is that should the human crew treat him like artificial intelligence of another actual being with feelings.  Im not sure if exploring this sub story was even worth it as it distracted from what people were really wanting to watch.  If the captain has ‘sex’ with AI and the AI decides it has feelings and says he loves her does it actually mean anything?  To be honest if the whole ships and crews life wasnt like totally dependent on the AI they wouldnt have bothered begging it to ‘get over it’.  Would you really put the life of a ships crew in an AI that has feelings and starts sulking and not doing its job as it was ‘heart broken’?  Would that not defeat the point of AI as AI is meant to bypasss ‘feelings’ and just do things more efficiently..

I did enjoy some episodes and the acting wasnt that bad.  Ive seen worse.  The CGI and effects are good enough, it doesnt look cheap or tatty.  So its good enough for a watch of the whole season.  In fact I would prob watch it again and would want to see a second season.

I did compare this to a recent similar show Star Trek Discovery.  And really there is no comparison as Star Trek kinda beats this in every way.  With Star Trek it flows better, its more solid, has better characters, better storylines you get better character building.

As said above there are times you are watching Another Life and you think wait what, but what about, and what happened to her etc…  they skip things and you suppose to fill in the gaps.  Like they go from artifact landing to following the crew in space in so little time you feel like youve missed something and then its like ok lets just see where this goes.

We learn eventually that the Aliens are not exactly friendly and will end up being a huge threat to human life on Earth.  The series ends with the remaining crew being horrified as they watch the Aliens destroying an entire planet realising that could be the same fate for their own planet.