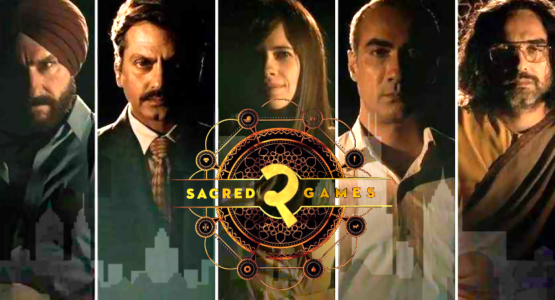 I kinda remember watching Sacred Games on Netflix, but I dont remember much of Season 1, its not like watching sholay where you could retell someone the story to someone years later.  But still I know I enjoyed watching it, it was produced well and well its got Saif Ali Khan a well known Bollywood celeb, aswell as numerous other good actors.

Season 2 of Sacred Games tries to tie up all the different stories and characters, gives depth to some characters, introduces a few new faces and well bring us all to the climax of the nuclear bomb explosion.

But Season 2 to me is starting to lose it.  We see Gaitonde a wannabe gangster with issues starting to lose his marbles as he tries to find answers and refuge with a guruji, who he sees as his third father, his role model or gaurdian. He is exploring and trying different things, he even makes a film about his life which flops, then he makes millions smuggling drugs. With the money he made he could have gone awol but he wants the world to remember him and his name and that seems to drive him. While he does find solace and peace of mind with his new cult and Guriju once there true evil goal surfaces he starts to lose faith in it and returns to his roots.

Gaitonde realises that he might kill here and there for survival or business but his Guruji simply wants to kill everyone regardless of who they are, kids, women elderly, he wants to sacrifice them all to start a new world, their world and with their principles.

With the Hindi Netflix shows they are not like traditionally produced bollywood films / tv they try to incorporate new ideas, push the barriers and maybe appeal to new audiences.  When I was watching this there were several scenes which I didnt feel were needed in order for me to enjoy the story, I understand it is rated 18 but still.  From what we see Gaitonde is portrayed as being bi sexual (or maybe multi-sexual), he has relationships and sexual encounters with both sexes.  And you really would not see a villain like this in a Bollywood move, in fact in a Bollywood movie it is very rare to even explore the sexuality of the villain.  But as the shows seems to revolve around this character and is also narated by him you can understand why they want to explore everything about his character and personality.

The additional of this kind of end of world cult spoils it for me and takes the whole season in a different direction, it mellows it, adds ambience, you try to make sense of the teaching of Guruji, do they make sense, do they have a point, does the world have to be reborn.  It always had to be something bigger than Gaitonde as he  alone could not contrive such a dangerous large scale catastrophic event that would leave viewers worried and scared.

So in Season 1 wheen Gaitonde said something big was going to happen he wasnt lying.  But I wasnt expecting a Nuclear bomb of that massive an impact.

Does Season 2 end with a huge cliffhanger?  Or is that it, you just assume that the password he has entered is right and he saves the world.  But you dont know.  However i cant see how Sacred Games can carry on from this, they found the bomb, if it went off well all the main characters are dead, or if it is stopped then they have the bomb and killed all the villains (bar a few lesser involved ones) and nothing else left to do.  Unless Sartaj carrys the show on with new villains and plots.

Although Saif Ali Khan is a good actor and famous I dont really think he has brought anything special to this character, acting is bog standard, kind of bland, even his emotional scenes seem wishy washy and dull.  He isnt a bad actor its just the character could have been suited to someone else, but then would the show have the same appeal, I think it would as the show is really based on Gaitonde and his perspective.

I enjoyed the variety of dialects / languages in some conversations characters were mixing english, hindi and marathi along with swear words, that would have taken some imagination while scripting.  If you dont lke swearing or suggestive sexual scenes then best avoid this show, they swear so much after watching it you will pick up a swear word or two and maybe letting one slip out in your sentences.

There are talks of possible prequels for season 3 onwards maybe this could work, but we now know the conclusion and most of the main characters past and drives have already been covered.

Overall a watchable Netflix original hindi tv series but its not better than Season 1 and it loses it here and there and what keeps you watching is find out what is the plan and what happens to the bomb.