The Android Tech Took All Our Jobs 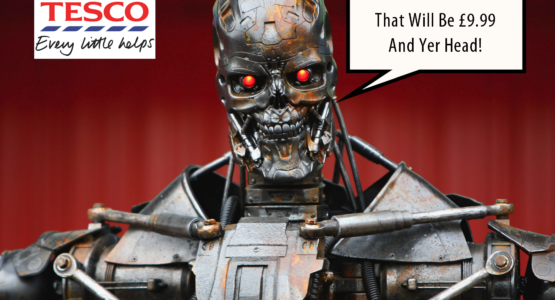 There is population increasing. Life span is increasing. More people on the planet living longer. Jobs are hard to find for most people. People have to leave their countries to find work, travel hours to get to work…
Technology is meant to help us and make life easier….
But then why are we hell bent on creating technology that is clearly taking jobs from humans? A supermarket used to be filled with human staff…now its mostly automated, self serve etc…
Taxi drivers should be getting scared as we know driverless taxis are around the corner… (maybe..)
But you say technology does make life easier…a smart kettle…a smartphone…a smart robot hoover..a faster computer… But all that costs money if the same tech is taking your job how will you be able to afford your own tech….
If you just lost your job to a self serve automated cashier..then go home and play with your super smart phone is that not like sleeping with the enemy?
IS Skynet already here/ Just not so extreme and graphic…a passive Tech Takeover?
But there is one scenario where automated tech would be very very advantageous…In a situation where there was very little humans…having driverless transport, automated checkout terminals, med bots etc… would be invaluable and free time for the few humans to focus on other things. What if this is just testing ground so something else. Like all new inventions and medicines it must first be tested on live specimens.
Just a conspiracy theory…but what if
If there was a disaster on Earth and a few selected people were to escape their destiny into space and had to survive in Earth in limited numbers then androids, robots and automate tech would be life saving.  There it would be useful but here and now we are seeing people losing jobs to tech.