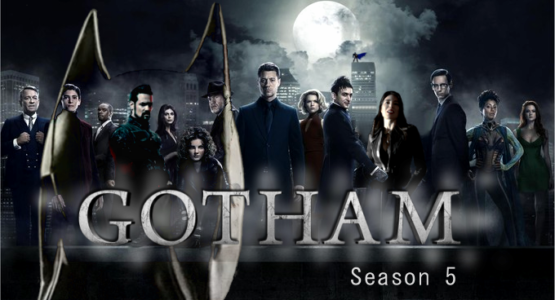 In this latest season of Gotham thats carries on where Season 4 left off is all about Gotham recovering from the blowing up of the main bridge and other buildings by ‘Joker’.

But the whole season is kinda weird, i didnt get the whole thing about Gotham for some reason being cutoff from the rest of the world and having to ration food and water? Its not like Gotham is in another country or a very remote island somewhere..or is it?

So this whole thing about Gotham turning into this kind of dystopian world like Mad Max where its all over run by gangs each with there own turf and rules.

The characters dont develop as much.  We see Bruce getting more involved with Gordon and the developement of Cat Woman selena.  We see all the usual favourite characters we all love or hate.  Dr Strange, Poison Ivy and even Scarescrow.

It is a mish mash of all the previous villains who seem to have more lives than a cat.  But in a way it makes it more exciting and is prob needed as we have seen all these guys in previous seasons.

There are some new villains, the unexpected one is Ras Al Ghuls daughter Nyysa and a new one called Bane.  Nyssa seekign revenge for her fathers murder and Bane coming to terms with his own dark ambitions for the world.

The season gets better towards the end as things come together.  I liked how the near the end we see further into the future of the characters, with Gordon growing a moustache and promoted to commisioner.  The main villains Penguin and Riddeler have become older but still have the same ambition to make the city theirs.   Some of these characters are long term regulars especially those close to Bruce and the popular villains.

So towards the end the characters have all grown up, selena had matured more into the role of Cat Woman, and its a new actress taking the role.  Now approaching the end we see glimpses of Batman in the shadows helping his old friends.  We dont really see more than just glimpses and flashes of Batman till the end where we see a sort of close up of his masked face but we cant tell who the actor is.  Will it be the same actor playing Bruce Wayne or like with Selena have a new actor?  We also dont know how much Batman has got into his actual role, has he just returned and observing from the shadows or has he built his Bat Cave and ‘boys toys’ gadgets.

If there is a Season 6 it might work but i dont really see it getting past that as now its turned into Batman show, Gotham TV series was like the prelude to Batman, leading to his arrival, so the question have they done that and its game over for Gotham show, or is there room for the Batman character in Gotham.  It would be interesting now to see the transition of Bruce helping Gordon and the police a little to Gordon becoming sort of reliant for the help from Batman.  How will the villains now face up to a new super hero in town.  Maybe we see the early days of Batman as he turns from bat figure in the shadows to the superhero that he is well known to be.   You have to remember this is a young version of batman and he is still getting to grips with his new role and obvioulsy his new toys.