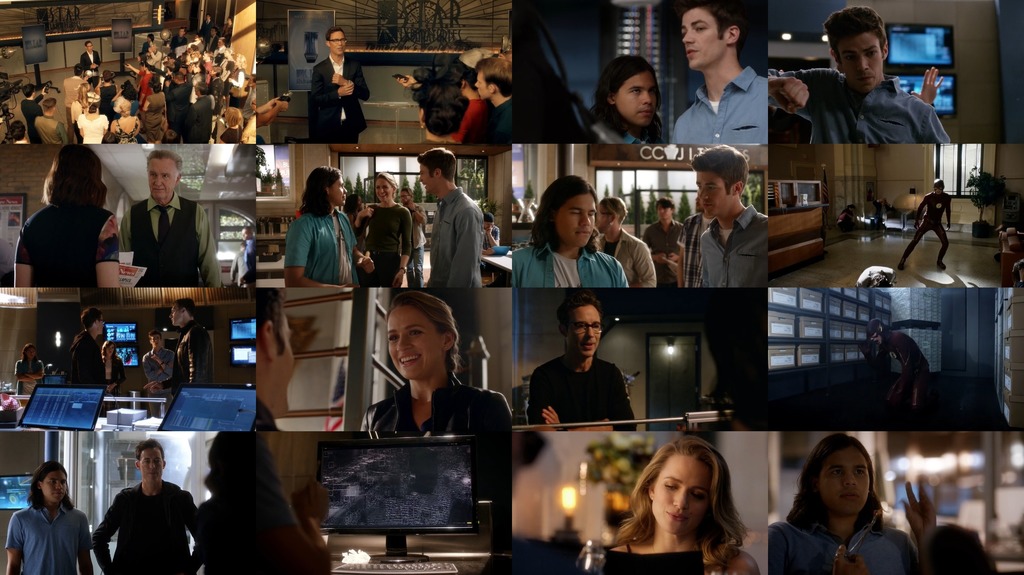 In The Flash Series 2 Episode 5 we see alot more of the new Harrison Wells and he seems to slot back into his previous role as a mentor and superior.  However due to previous events we dont seem to trust his good intentions as much, neither do the characters.  Its funny when Joe comes waltzing in shooting first like you would, surely he would know that Flash wouldnt just be standing there talking to Wells if he was the Villain.  The other funny thing in this scene is the way Barry catches the bullets as though in a slow motion dance move.

In episode 5 we also have a second longer introduction to Kendra (the immortal) who we see alot more of in DC’s legend of Tommorow.  Very pretty, but we assume she wont be a regular.

The main villain in this episode is The Light, who has been sent to kill The Flash by Zoom, her powers are based on use of light, bright light and she can manipulate it.  We dont like the acting of the other Flash, the costume and hat suck and he looks like he’s just come off the filming set of Supernatural, bit too rigid and doesnt really fit in with the other characters.

The chemistry between Barry and the Blonde cop develops and they go out on a date, however is this not a bit too soon and seeing that both Barry and Iris have seen the future newspaper and have feelings for each other does this not seem wrong, or are they both just delaying the inevitable.  On the date he wears Black and white camera spy glasses surely they would have color ones?

In this series we dealing with not just time travel which opens up endless possibilities and complications but add to that infinite other Earths, meta humans and dopplegangers and this is a recipe for confusion.  But its handled well in that they dont go to deep into the science of it.  Its just a case of ‘this is a portal, people come from other Earth, thats it accept it’…

If the Flash is so fast its surprising he can be taken off gaurd by the Light and blinded.  Would he not be fast enough to avoid this?

Star labs… It seems way too chilled out for a lab which works with metas and technology you probably wouldnt even find in Area 51….  Its like ‘Hey guys heres a gun that creates a big wormhole and sucks you to the other side of the universe, isnt it just cool, lol lol’   and they are so laid back about it…  The lab needs some extras in the background….scientists and maybe janitors etc..

The others finding out Cisco is a meta is a surprise as its after a whole series, but they seem to make him unsure and insecure.  He is still yet to master and learn his powers.

Is is just me or at 42minutes The Flash makes a comment to The Light that sounds just like Snart…  Maybe Snart is influencing Flash.

Cisco and Kendra….  Is coffee all Cisco wants…. Im pretty sure not