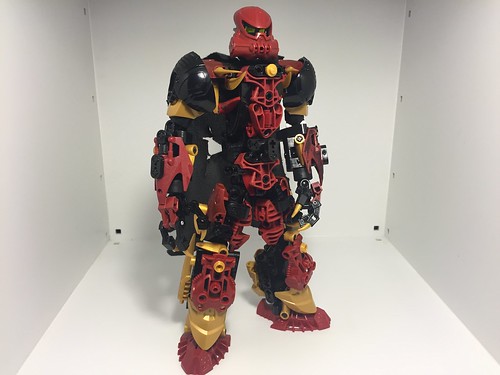 After 4 years, Shadowflame has been revamped!

Name: Devon Kramer
Species: Ta-Matoran (Mutated)
Occupation: Leader of the Toa Fieldus
Titles: The Indestructible, the Shadow Phoenix, the Toa of the Field, Shadowflame
Alignment: Good
Personality: Courageous, Cunning, Outspoken, and Level-Headed
Element: Fire and Shadows
Side Powers: None
Kanohi: Huna (Mutated)
Weapons: Inferno Blade, Brimstone Shotgun
Backstory: (Please disregard all back stories before this one, this is the TRUE backstory) Thousands of years ago, two beings of Fieldus Magna were born, one of fire, one of ice (Damian). Their parents, now unknown to history, created these beings. These two now parental beings were of different origins. The father was of the Fire tribe, while the mother was of Ice. There two parents decided to keep this “love” of theirs a secret until further notice, for they did not want to get shunned by their tribal elders. The Father took the Matoran of fire, Devon, and raised him as a respectable Matoran of fire. Over the years, Devon became very popular among the tribes members, showing great skill in battle, and planning out strategies. One day, the tribe decided that a new leader was to be formed. Devon’s father stepped down from his position as leader of the tribe, and Devon took his place. Devon thrived as a leader, he was outspoken, courageous, and calculating. His tribe thrived for many years under his democratic command. One day, the tribe was stricken with a horrible event, an event that shapes the very nature of the world itself. On this fateful day, Hydroxanoid, The second Emperor of the world, attacked the tribe, knowing it wasn’t under his command. Hydroxanoid sent out his army of TERMINATOR units to destroy the Matoran villagers. The Matoran fought back, but to no avail. Devon himself watched as his father was crushed by the hands of Hydroxanoid himself. Devon was shocked, traumatized, and stricken with sorrow. Hydroxanoid decided to keep Devon alive, and use him for an even more devious plan. Hydroxanoid hooked up Devon to a machine that used his body as a cast, a mold for creating his newest creation, the perfect killing machine, the DEVESTATOR Unit. After this was done, Hydroxanoid continued to mutate Devon in unspeakable ways, creating an abomination within him. Hydroxanoid’s biggest mistake was experimenting with the one thing that saved Devon’s life, a Toa stone. Through this experiment, Devon was turned into a Toa, but not just any Toa. Hydroxanoid’s experiments on Devon gave Devon the power to use not only fire, but shadows as well. Devon quickly broke free of Hydroxanoid’s laboratory and took off running. After running for what seemed like eternity, he came along a secret hideout, and was soon taken hostage. Soon after his capture, he realized who captured him, The Elemental Heroes, a rag tag team of Toa who rebelled against Hydroxanoid’s rule. After explaining himself, he fought alongside the team as second in command, becoming best friends with the leader, Tatrix. He was dubbed Shadowflame by Tatrix, Devon always hated the name, but he uses it to this day to honor his Best Friend. Soon they overthrew Hydroxanoid during the famous “Battle of Saga-Nui”, “Killing” Hydroxanoid. But, after these events, and a short time of peace, Atukam fought for the throne. Atukam himself wiped out Devon’s entire team, even Tatrix himself was killed by Atukam. After seeing his brother after so many years, and seeing him trying to rule with an even worse fist than Hydroxanoid, Devon knew what he had to do. He scoured the lands far and wide for a new team, a better team, a more powerful team. One by one, he found them. He created the Toa Fieldus, consisting of Himself, Protron, Eisen, Cloudburst, Raphael, Taxix, and Voltz. Now, after many years of fighting together with his team, they continue on, fighting against all evil. Devon will one day destroy the thing he hates the most, tyranny, and will fight his brother, Atukam, to stop it.