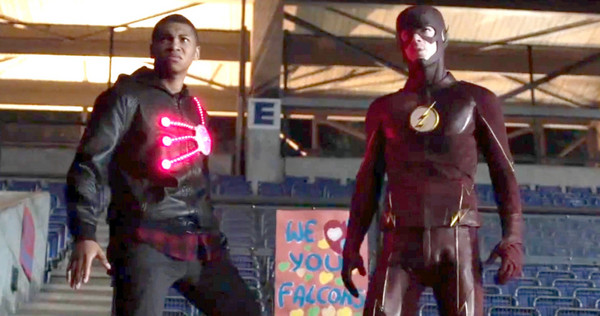 The last episode we see someone come through the portal in Star Labs.  We find out it is Harrison Wells from the other Earth.

In Episode 4 We are also introduced to a new character Jefferson Jackson.  If you have watched DC’s Legends of Tommorow you will recognise him as the new Firestorm.  The Firestorm character is quite strange, its very rare to see somethign like this where the super hero is a combination of two differing characters.

The way certain elements of the story are taken lightly and jokingly passed off is not veyr realistic of the characters.  We also see some chemistry developing between the new lady cop and Barry.  Will this develop further or he is still destined to be with Iris.

We see the unhappy scientist Dr Hewitt using the firestorm like powers for bad and being taken down by the Flash and new Firestorm.  How will this new character fit in and affect the dynamics of the show.  Well we know from the previous Firestorm it was on and off, he turned up when The Flash was in trouble.  What I dont understand is why Professor Stein becomes ill then feels better after merging with Jax, is he sucking up some of his energy?

Iris seems to be wandering around aimlessly in this episode, still looking for answers and direction.  She gets to meet her mother after many years but isnt so happy at the reunion.  We see her in tears we assume this is a result of losing her fiance Mr Thorne and also of meeting her mother but not being as she expects it.  Surely this is where Barry comes in to console here and where they finally get together.  Or maybe it leads to her becoming more distant.

We see another villain character a strong human/shark hybrid who attacks The Flash and is rescued by the new Harrison Wells.  Will this Harrison be a good guy or villain.  Will he be the role model who Barry looks upto.  We will find out in the next few episodes.