Your new phone is a circle ! 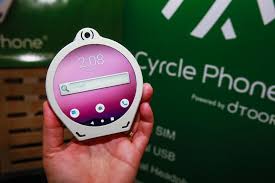 Mobile phones have been around for while now.  They have got smaller, thinner, flatter.  Screens have bigger better, tougher and more visible.

The phone specs have become comparable to some low end desktops or better.

But one thing that hasnt changed in the shape, yes they are always rectangular!

The obvious exception being Smart Watches, but they arent really mobile phones as such as they are limited in functionality.

But now there is a new round shaped mobile phone device by dToor called Cyrcle.  Could it be a game changer or a passing novelty?

Take a look at the new Cyrcle Phone:

What about games and videos, these are always designed for a rectangular screen!  So you would lose so much of the screen if it stuck to the standard aspect ratios like 16:9 or 4:3…  If you opted for games designed for round phones you really would not have much choice i would say.

So to be honest I would say its more of a passing novelty than the next big thing. But you can have a lok at the video yourself and decide what you think: