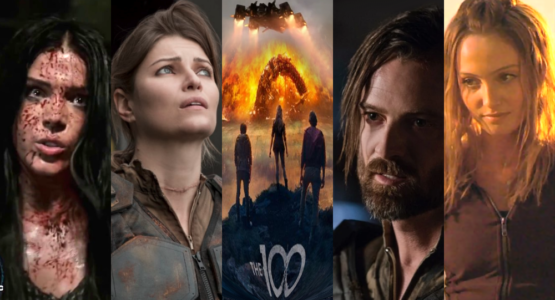 I was a fan of The 100 when it first came out and I have now watched it up to the 100 season 5.  It had a nice storyline about survival, nice range of characters and it was sci-fi.  I stopped watching it at season 3 as it was turning a bit too ‘Conan the Barbarian’ and seemed to drag on, there was still storylines to keep you interested but not enough.
Last month I came across The 100 again on Netflix and realized it had no gone up to Season 6, wow!

Well Season 5 to me was refreshing.  IT brings in some new characters and develops and really tests the relationships of the main characters.
In season 5 we see some of the 100 give in to pressures and turn to the ‘dark side’.  Seeing Octavia become the Red Queen was a bit dramatic and tbh I couldnt really see her in that role, I guess she was a good fighter and earned the respect to lead the Wonkru.

Talking about Wonkru one of the best dialogs in season 5 has to be “you are Wonkru or you are the enemy of Wonkru, choose” and you knew someone was going to get killed…

Hey Clarke makes a new friend…  who grows up fast.  We see a fair bit of time skipping in Season 5 with the cryo pods being used aswell, we seem to skip anything from 6 to 100’s of years.  We lose Monty and his girlfriend as we forward 100’s of years, so we can safely say everyone and anyone they knew has long gone and now really they are the last of mankind….well until Season 6.

In Season 5 loyalty’s shift here and there, and characters seem to make deals with the devil to save themselves or their friends.  Tensions work on personal relationships and at sometimes I wasn’t really sure who was the good guy as they were all just trying to do the same thing which was to survive the best they could, but each side wanting to do it a different way.
So the only place left habitable is the valley rich in greenery and breathable air, but unlike most good things…people will fight over them and greed will kick in.  So season 5 in mainly about who gets to have the valley and what they willing to do for it….

We also see a surprising return of a commander in Madi, the new child leader, but in my opinion she isn’t really ready for the flame and what it offers and we see her lose it a bit especially in season 6 as she battles with ‘the dark side of the flame’.

But its all in vain as the apparent ‘villain’ who really is just the most ruthless character has the view that if he cant have the valley then no one can and then boom there goes the valley.  But you have to think all these characters in their quest to survive have killed people and you may say that the ‘good guys’ have an excuse, but they themselves questions what they have done.  There are characters though that really have just killed others for the wrong reasons and are criminals but even some of these change sides.  Its back and forth for example Diyoza…is she a bad guy, good guy, just a criminal looking for redemption or just willing to side with whoever to win?

It was sad to see season 5 ending with the survivors having to leave Earth behind, something they had fought so hard for.  We also lose a regular character or two.

As we approach season 6 its looking more like its turning into Star Trek lol, with Earth out the picture they are boldly going where no mans gone before… or maybe not.

So i enjoyed season 5, i liked the characters even the bad guys did a good job at entertaining.  The twists were good and the storyline keeps you wanting to watch more.

The 100 Season 6:
In season 6 the crew arrive on another planet and well you know its not going to be ‘..and the lived happily ever after’.  On Planet Alpha they come across Sanctum, the last human settlement that has grown and survived for over 200 years.  But along with the joy of finding a habitable planet come new dangers and new enemies.  They sort of walk into something over their head.  Do these guys just walk into trouble or maybe it just follows them.  but into season 6 we lose Shaw, a pilot who also is ravens love interest and it was a shame.

In fact in Season 6 its a culling of characters, lost of characters either lose their minds (literally) or die.

So is season 6 any good?
i think after the action of season 5 they ran out of steam or stories that really worked.  They are working with new things… moving 200+ years ahead, new planet, new society and thus having to figure out how it would work.  How would the past mix with the future.  So in sanctum what they have is a peaceful society however not that advance they live quite primitively in terms of beliefs and technology.  They live in a protective dome and face enemies and dangers from their surroundings, but they also have hidden agendas and all is not not what it seems.  It was a bit strange as how the powers that be in sanctum, they are seen as gods and that is the start of the problems where The 100 crew don’t like it.

To be honest before the 100 crew arrived sanctum was moving forward with relatively little chaos.  But this order had a price and the people in charge were hiding the truth from the people.  But isnt this the case with all ‘powers that be’?  which government is totally transparent with its people?  So whether we believe it is right for the 100 to intervene and seek to change things, thats what they going to do.

One of the good scenes in season 6 is when the 100 are exposed to the eclipse / red sun and start going delusional and attacking each other.  Another enjoyable thing was watching Clarke pretending to be Josephine prime and getting away with fooling Russell and all other primes.
Russell did a good job as the ‘villain’ in this season, but again he is only a villain relatively speaking as he is also trying to survive and looking out for his own people.  Its just that mind wiping hosts from his society so certain ‘gods’ could be immortal is not really a good thing, especially as these hosts have been lied to.

As with previous seasons Clarke ( Eliza Taylor ) takes the lead role and it is sort of driven around her, but we see more of Octavia and she has more presence and importance.

I liked the character of Gabriel but its still not clear to me as to what he actually wanted, especially seeing that he wasn’t prepared to kill the person who wanted to kill him.  When given the chance he backs down.  But he does play a key role in where the 100 are heading next in Season 7, as it seems planet alpha is hiding a secret, which no doubt will be the storyline in the next season.

So overall I enjoyed The 100 Season 5 and would watch it again but not so sure about season 6, the characters / actors seem a bit bored, worn out.  There is less action and it seems a bit experimental and i think the writers were taking a risk in whether the plots would work.  I did watch all episodes but wouldn’t be too keen to watch season 6 again apart from the last one or two episodes.

Here is The 100 season 5 and 6 trailers and related videos on Youtube.