Then the keyboard went wireless 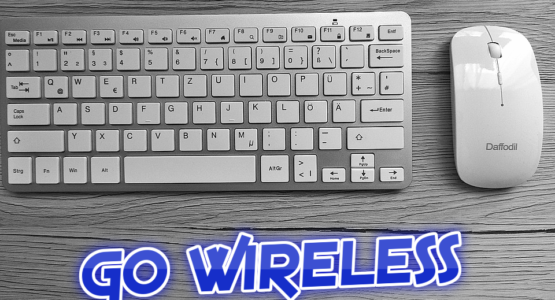 Ive always had a wired keyboard and mouse.  Its always been a PS2 keyboard not a USB one.  The reason for this was I often build and repair my own desktop towers.

What I find its less hard work when you use a PS2 keyboard when you are say installing windows or something goes wrong with your USB drivers and you need to enter repair mode.

On some PC’s i couldnt use any USB device when setting up a new PC and Windows until I had installed and setup the keyboard and USB drivers.  This means before doing this you had to make use of just mouse input and maybe on screen keyboard.

With the newer motherboards and PC’s they come with USB support plug and play so you can just plug in a standard PC mouse and keyboard into the USB sockets and they work as normal, though you prob still have to update their drivers and possibly setup their software counterparts to use them to their full potential.

So I did go with a USB mouse on my latest PC build as it had much better DPI and response.  Its also lasted longer than the cheaper PS2 standard mice I have bought in the past.

But I decided to go one better and decided to try a wireless keyboard and mouse combo.  So bought a nice but not too expensive set on eBay.  Now one con is that as they are wireless they have to work off batteries, which have to be replaced and hence extra cost.  But still put in a decent set of batteries and they last a long time or long enough…

Now these wireless technology used is Bluetooth, the same tech you use to connect your mobile smartphone to your cars handsfree system.  So once you plug in the Bluetooth reciever into the PC’s USB socket you can then use the mouse and keyboard as normal.  The great thing here is two devices just taking up one USB socket!  So you now got one free USB socket.  But I suppose you have to buy the mouse and keyboard as a set for this to work.

In terms of pros yes theres less wires and its tidyer and you can position the mouse and keyboard where ever you want and even sit away from the desk or screen.  Its easier to use as you dont have to worry about the wires obstructing or restricting movements.

However as its wireless you can sometimes but rarely get lag or loss of transmission esp if your batteries are low.  Also when buying a keyboard always make sure it has the layout you are used to for example o the one I bought it is really difficult to find some keys and the | symbol requires pressing of three keys…

Ive still kept my wired mouse and keyboard and mouse and actually use the wired mouse more, I just think its more reliable and more accurate as it cost lot more than the wireless one.

The wireless mouse would be great so say giving presentations at work, where you could be sat away from the PC, or when its just inconvenient to have a wired connnection.  Maybe its just preference..when it comes to a desktop PC you cant avoid wires only limit them best you can.

To summarise if you like a tidy desktop, have a bit extra cash to splash and like the freedom then definitely go wireless, however definitely go for a good brand or read user reviews and always check the keyboard layout.