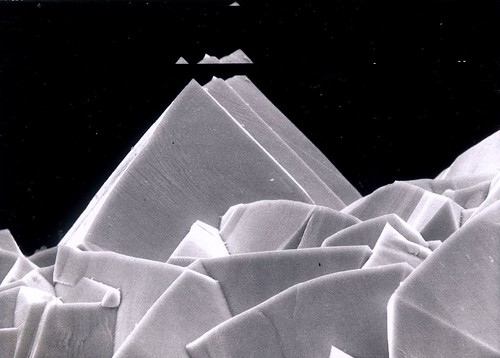 At first they were small and looked like normal faint wispy clouds that grew and hovered over the three distant peaks. As the explorers got nearer they could see that the clouds were crystal shaped like the pyramidal mountains that shone below. These, the mountains beyond which their craft lay waiting, were particularly smooth and would be difficult to climb. They hoped that an ascent would not be required and that a safe route would present itself.

The clouds continued to grow at a substantial rate until they reached what must have been a critical mass. At this point they began to shimmer and, as far as our heroes could make out it began to snow a pale green snow. They presumed it was snow since at this distance they could only guess as to what was really happening. Meanwhile, behind them, all evidence of the village was now gone, covered in a lake of pink gas which was now creeping along the ground slowly behind them.

They pressed on as the turquoise cloud layer began to grow and flatten, spreading out in a thin layer over the surrounding region. A pale blue glow from the five suns filtered through the cloud layer casting an eerie light over the ground. As they approached the mountain they could see the edge of the bank of falling snow getting nearer. The snow formed a thin green twinkling layer on the cooler upper slopes of the steep mountains. Soon it began to fall around them.

The crystals were quite large, and star shaped, exhibiting dichroism in in the blue glow of the filtered sunlight. It was not single wave dichroism but multicolour. The snow flakes reflected a pale green that was most prominent colour when they lay on the ground but looking up at them as they fell they transmitted a variety of colours which made them twinkle and sparkle in a beautiful kaleidoscopic display. As they fell on to the warm ground, heated by the underlying thermal currents, they immediately began to sublime and without melting turned straight to a gas that hugged the rocky ground surface. The crystals which fell on their space-suits lay there glistening and slowly rotating for a few seconds before turning to a green/purple layer of gas that covered their arms and bodies before sliding down their legs to reach the ground to intermingle with the rest of the gas layer which was now building up. This vast layer of slowly swirling gas then moved downhill towards the advancing pink gas which covered the village.

New Readers: If you want to start at the beginning of this adventure then look at the first in this set which you will find here.

This is a Scanning Electron Micrograph of complex crystals of tin oxide grown by chemical vapour deposition.