How to use headphones on iphone 7 with lightning socket 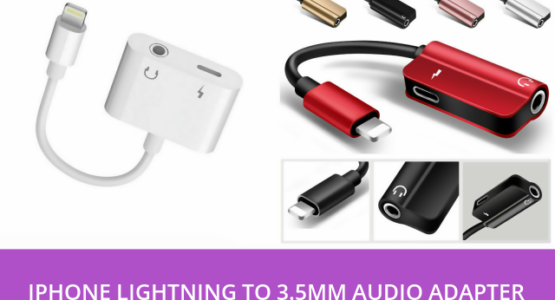 I pulled out my headphones but…..

I was using an iPhone 7 and then looking to add some sound on top existing audio on a video using beatdrops app.  At present I would have to listen to the audio from the phones speaker and record in real time using the phones mic.

To do this it was essential to use headphones as to increase recording quality and also cancel put the echo effect from music playing from the phone speakers.

I realised the iPhone 7 like some other phones does not have the standard 3.5mm audio jack socket.  So you can not plug in your standard 3.5 headphones.

So was having a look on eBay and found some nice headphones.  But while browsing I came across some other things.

I found some adapters that connect to the iPhone’s lightning socket (which you normally use to plug in your phone charger) and then on the other end of the adapter there is a 3.5mm audio socket.  So a lightning to 3.5mm socket (female).. lol why didnt i think of this….

Great this means I dont have to buy new headphones as I have good quality ones already, that have the 3.5mm jack.  So plug the adapter into the phone and the headphone wire into the adapter and you can listen to music from the phone.

But something even better, obviously listening to music or watching videos drains the battery so I found a lightning adapter that not only has the 3.5mm socket but also a lightning charger socket.

You can buy the in different colours and there are several designs for those who are bit choosy when it comes to phone accessories.

I did read that sometimes they ship headphones with iPhone 7 and similar that have a male lightning jack.  So you can plug these headphones directly into the lightning charger socket.  Again  you can also buy splitters that have two lightning female sockets.  So you can charge the phone and listen to music at the same time.  Great!

In terms of being practical and convenient ideally you would want headphones that were compact and also wireless. It saves space and you dont have wires dangling around or getting tangled up! So if I was going to use headphones outside for example when on a train journey or while jogging the I would definitely just buy something like airpods. But for home use especially as I already had good quality ones the lightning to 3.5mm adapter was the best solution.

It just goes to show you should always shop around and sometimes you can find something that fits your needs but you would not have thought of!

Dont forget to check out my other post here showing iPhone hacks and tricks!